It's a beautiful, sunny day here in northern Iowa!  Temps are in the 30's, and there is very little wind.  Very nice weather for January!  I have been sewing in the evenings... some nights I have to drag myself away from the couch...  Seems like I would rather lie around and watch TV.... Oh well......  I did manage to finish this quilt top: 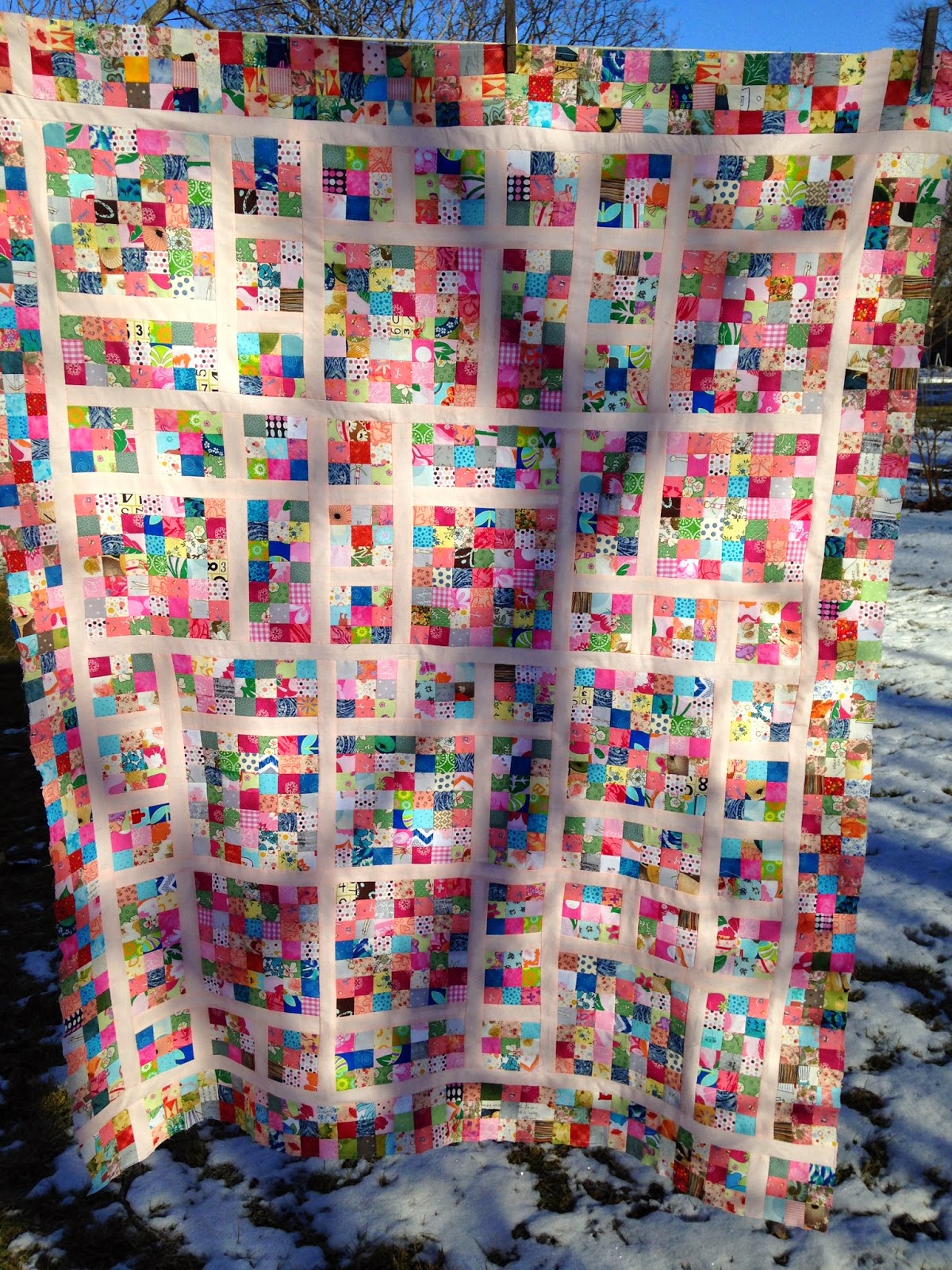 It's a tutorial I found online, the quilt is called "Growing Up Odd".  Cute name.  I kind of did grow up odd.  :)  Anyhow, you can find the tutorial here.  I used 1.5 inch strips, and made less blocks.  I think mine measures about 44"x55".
I also got the "Film at Five Quilt" back from the quilter.  It too is from "Wedding Dress Blue" blog, and the link to this tutorial is here.  I know I've said this before, but she has lots of great tutorials for using up scraps. 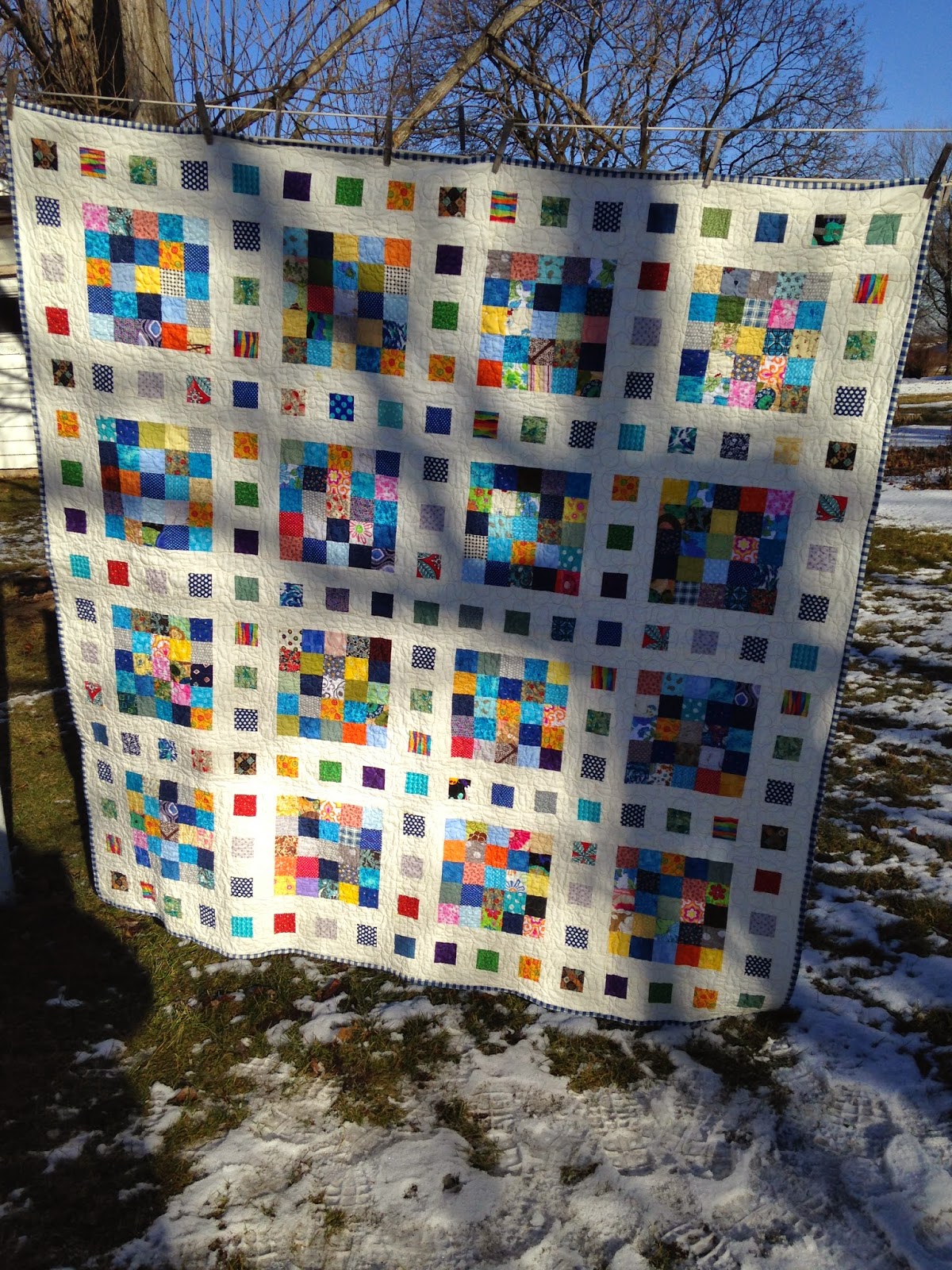 Mine should really be called "Film at Four", since I made it 4 blocks x 4 blocks, rather than 5 x 5.  I used navy and white gingham checks for the binding.  Something I've had in my stash for probably 20 years....... :)  I could tell it was 100% cotton though.... not like most gingham out there.  Why is it that most gingham is a cotton/poly blend?
Lots of bright sunlight and shadows today..........not the best for pictures, but better than taking them indoors!
Linking up to Finish It Up Friday....... on Saturday!
﻿
Posted by Karen H at 10:47 AM

Your quilts are crisp and lovely. It's hard to believe that you used just scraps. Nicely done.

These quilts are so pretty, and a great use for your scraps. I'm glad you had sunshine today. Maybe your weather will make it to me in Michigan (if the Big Lake doesn't get in the way).

Great work with the use of scraps! I am just having a wee giggle...as I began to read your post I saw the sentence about the 30 degrees temp but then saw snow in the photo, which just didn't match up in my brain...took a second to remember that you guys work in Farenheit while here in NZ we use celcius (it is summer here and the 30 degrees we had today was too hot for me and I spent two hours in the hammock in the shade of a tree!No snow in sight!) I don't know what that would be in Farenheit, but I am certainly not complaining about having a hot summer!

And today starts with snow? rain? hard to tell this early! I only know it is wet outside. These are so sweet. I love the gingham binding!

Great scrappy quilts!!! I enjoyed seeing them displayed in the dappled light with snow in the background. I'm out in sunny California, where we're having a drought for the 3rd year now and so I'm longing for stormy weather. I so want to use up scraps and stash. I have too much to justify buying more fabric and that's not a good feeling-- on the bright side, I don't have to spend money if I can find the right patterns to use up what I have! Thanks for the link to the blog with the scrappy quilt ideas!

I love your quilts--the original Growing Up Odd what photographed on a day much as yours was...mixed light, but good for a mixed quilt. I love your version of both quilts. thanks for sharing.

Lovely quilts - great scrap busters, am going to check out the blog for scrap using tutorials - sorry for missing this post :)

Beautiful quilts! And great way to use up those scraps. Love them both! I have a drawer full of 2 1/2 inch squares, and I'm always cutting more. It's good to have patterns for using them.

Glad you got some sunshine - that's in short supply in this neck of the woods. We did get a little today, and it was nice!