2 finishes - one big, one small

The big, brown Arkansas Crossroads quilt is done.  I've had it back from the quilter for awhile, and I just finished sewing the binding on it this morning.  It's almost too big for me to get a good picture of it.  It has been washed and dried, so it has that crinkly look that I love.
Here it is on the clothesline... 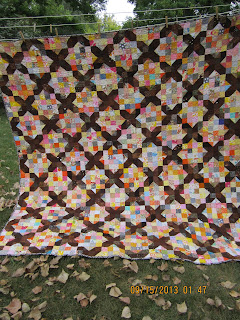 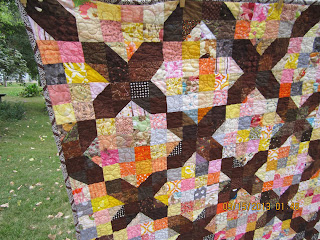 I think I first mentioned this quilt back here.
This is for my oldest son and his wife.  They mentioned that they would like a quilt with brown in it.
The backing has been pieced with stuff from my stash - and most of it is pretty old fabric! 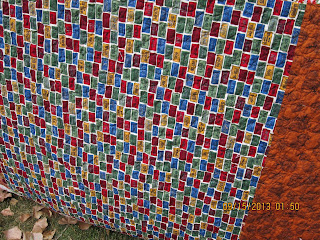 This is part of the back, and this fabric, with all the little license plates, is rather special.  Back when my boys were little, I tried to do some sewing.  If I remember correctly, the main problem was the lack of having a designated sewing area.  Before we had a dining room, I sewed on the kitchen table, or on a table in the basement.  Our basement is not my idea of a nice place.  We have an old house - it's an old basement.  Rather damp.  About all it's good for is a washer and dryer, and maybe some storage.  Oh, and a treadmill and TV.  Anyhow, I didn't like sewing in the basement.  It was rather creepy.  And if I sewed on  the table in the kitchen, it was always a lot of putting away and taking out.  I had bought fabric to make vests for the boys.  The 2 younger boys vests were made first.  One was made from Batman fabric, and one from Power Rangers.  Think 1994.  Popular stuff back then.  Jacob's was to have been made out of this license plate fabric.  Route 66 theme.  Well, his vest never got made.  Probably for the best.  I can't quite picture anyone wearing a vest made out of this fabric.  But it did seem pretty cool at the time!  :)
So....... fast forward to a few months ago.  I was upstairs, going through the closets to get stuff together for Goodwill.  I came across the license plate fabric, which I thought was long gone.  When I mentioned to Jacob that I had found the fabric I was going to make a vest for him with, way back when, he said, "You aren't going to make a vest for me now, are you?"  LOL.  I assured him that I was not.  But I figured I might as well use it on the back of his quilt, for old times sake. 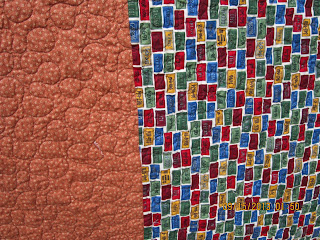 I had my husband hold the quilt for me, but it is big, and it didn't work out a whole lot better than the clothesline. 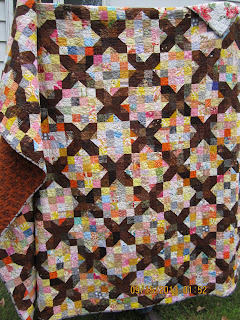 Here you can see a little big of the different backing fabrics.  Anyhow, it finishes at about 96" x 96", I believe.  One of the biggest quilts I have ever made.  Similar in size to Easy Street.
And here's one more picture... 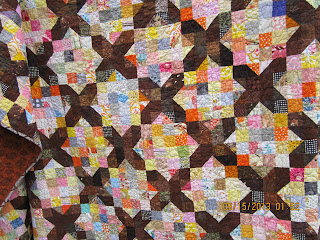 I will give it to my son and daughter-in-law next month, after it's on display in the quilt show.

I also finished a little rag quilt - for my neighbor's new grandson, Isaac.  He was born back in June.... I'm just a little late! 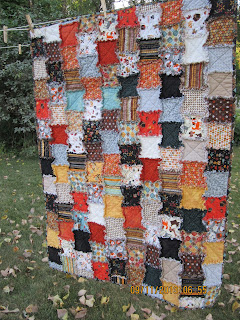 I off-set the columns so I didn't need to worry about matching seams.  I also put binding on this quilt - I like to put binding on rag quilts - I think it gives them more stability.

I was in Omaha for a few days - with my dear hubby, and I found a great quilt shop.
I came home with these... 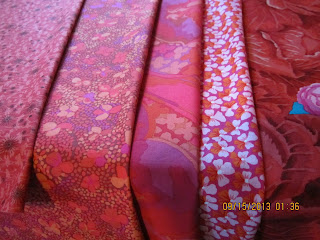 Some lovely reds........ mostly Kaffe Fassett's.  They will be part of my next project.  I hope to have photos in a few days!