The weekend before last, we took one a trip, our final "hurrah" of the summer, you might say. Son #3 whined that we hadn't taken him anywhere during the summer, and he would be leaving to go back to college soon. I took Friday off. We stopped in Mankato, to drop Charlie off at with son #1 and dear daughter-in-law. After going out for ice cream with them, we headed up to the Twin Cities. Shakopee, to be exact. We would be spending the night at the hotel/casino. 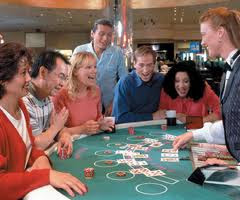 Note: none of us are in the picture. And I would NEVER sit at a table and play Black Jack. I would (and did) play a few slot machines and video poker. Son #3 was the only one that came out ahead. He seems to have a thing for red 21 on video roulette. 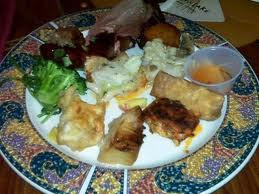 We ate the buffet........ it was delicious! I don't know what's on this plate (again not my picture)! But of course who would think to take any pictures of the buffet.... :). Also keep in mind that I am not very good at getting my pictures lined up with what I'm writing about!

So, Saturday morning we got up, fed the machines a little more money, and decided to leave. The plan was to go to the Uptown Art Fair in Minneapolis. Ah, but it was raining. We decided to go to Key's Cafe for a delicious brunch. 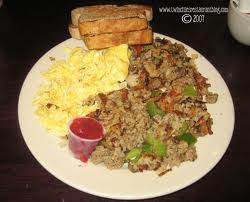 Son #2 had the Italian Hash. He gave me a sample and it was delicious! (Again, not my picture. - are we seeing a pattern here?)

By the time brunch was over, it was done raining, the sun was out, and it was getting very warm. (ok, downright hot!) We headed to the uptown area of Minneapolis, for the art fair. It took awhile, but we finally found a parking spot several blocks away. We saw lots of wonderful artwork for sale, and tons of people.

We walked around for a couple of hours. It was really hot and humid. Finally, around 4 p.m., we decided to go check into our motel. We were staying near the airport, in Bloomington. I won't bore you with any pictures of the motel, since I don't have any. In fact, I really don't even remember which chain it was.
We rested and cooled off for awhile, before heading out for dinner. We ate at Psycho Suzi's - a place we had seen on Diners, Drive-In's and Dives on Food Network. This actually is my picture of the sign...... 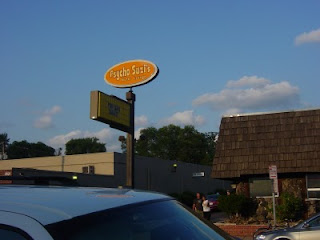 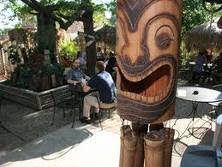 It is a tiki-bar. But this is not my picture of the tiki......anyhow, you get the idea. We had very tasty BBQ chicken pizza. It was SPICY! 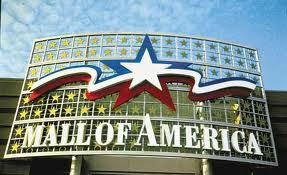 On Sunday, we got up and went to Ikea. 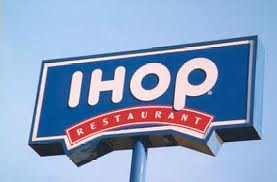 Then we went to Slumberland. I have been wanting some new furniture for quite awhile. I offered son #3 my sofa for his apartment, and he accepted. That meant I need to get something new for the living room.

In the Slumberland ad in the Sunday paper, they had a brown sofa and loveseat on sale for a great price. 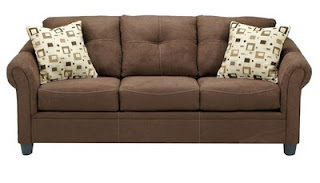 We'll be getting the matching loveseat, too....... sorry, no picture - it looks the same, only 2 cushions rather than 3. We are also getting a recliner........ but it's taking me forever to add the photos, so I'll wait and show you when I actually get it. Oh, and while I was at work today, they called. It's not coming tomorrow, but next Tuesday instead......

After we left Minneapolis, we went down to Mankato, to pick up Charlie. Before leaving for home, we took the whole group out to eat here....... 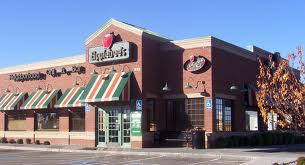 I know....... not a very exciting vacation, but we did have fun. I'll try to post some pictures of projects later this week!

Email ThisBlogThis!Share to TwitterShare to FacebookShare to Pinterest
Labels: Vacation

Another theme I see is "where we ate for 3 days"...you always find something different.
I am a McDonalds gal myself, how boring is that?